Word Play – which word do you use?

‘Last’ and ‘past’ are often used interchangeably when denoting the passage of time. It is understandable, given that both are adjectives in this context. However, they have distinct meanings.

Each has more than 15 definitions or usage types in English across several parts of grammar. In this one overlapping meaning, take care to select the correct word.

‘Last’ means most recent, immediately before the present:

‘Past’ has several time-related meanings, but for the purposes of this usage it means “gone by in time” or “belonging to or having existed or occurred in time previous to this” or “gone by just before the present time” (Macquarie Online).

Beware the most common error!

This is a ruling that often appears in style guides, rather than a point of grammar. Using the phrase ‘a number of’ when trying to define ‘how many’ is considered to be vague and inadequate. “I want to buy this car for a number of reasons.” Words such as ‘several’, ‘some’, ‘many’ or ‘a few’ are more definitive and succinct alternatives.

There is at least one instance where a version of ‘a number of’ is the most accurate alternative. This is when the number envisaged is large but unknown and is not accurately expressed by using ‘several’, ‘some’, ‘many’, ‘a few’, ‘hundreds’, ‘thousands’ or ‘millions’ (see example 1).

Example 1: As Victoria’s population continues to grow, housing affordability and cost-of-living increases are major challenges for an increasing number of people in our community.

‘The number of’ uses a definitive determiner (article – ‘the’) and has appropriate uses (see example 2).

Example 2: Monitoring of stored-grain insects across Australia reveals that the number of populations with insects highly resistant to the fumigant phosphine has increased from around five per cent in 2010 to 10 per cent in 2015.

When ‘a number of’ next slips into your writing, think again. Would one of the alternatives be more accurate and succinct? Or does the usage properly fit into the style of one of the two examples?

Word Play Tip #5: myriad or a myriad of?

In writing this tip about ‘myriad’, I learnt something new about the word. As a young journalist and subeditor I was taught that ‘myriad’ (meaning ‘innumerable’) should be used as an adjective without an ‘a’ or ‘of’ either end; for example, myriad stars. Media style guides throughout my career reinforced this definition.

On checking the Macquarie Online, to my surprise I found its first definition is: “noun 1. an indefinitely great number: a myriad of stars.”

‘Myriad’ comes from the Greek, myrias, meaning “a number of ten thousand”, so over the years we’ve been doing a lot of exaggerating with our use of ‘myriad’; for example, “There are myriad reasons why …”.

When you use ‘myriad’ you are either describing a number too big to count or you are exaggerating for effect: “There are myriad reasons why you are not going to that party!”

I’ll just have to remember that ‘a myriad of’ is not automatically wrong.

This is not a usage mistake that can be solved by clarifying which is the noun and which is the verb, as both versions can be used as either noun or verb.

A rein (or reins) is the long, narrow strap of leather connected to a horse’s bridle or bit that enables the rider or handler to control and guide the horse (or other animal). Some common phrases flow from this word and concept:

‘Reign’ is about ruling, as in a monarch. “The reign of Queen Elizabeth II began in 1952.” Today, the word has become more widely applicable to people or teams dominating or at the pinnacle of a sport. For example, Richmond, having won the 2017 AFL grand final, is the reigning premier in the 2018 season. Serena Williams’ reign as the top-ranked women’s tennis player in the world lasted for 186 consecutive weeks and 319 weeks in total.

When you need to choose in your writing whether it should be ‘rein’ or ‘reign’, ask yourself if the usage is in the sense of taking control (rein) or ruling/dominating (reign).

A ‘licence’ is a tangible thing: a driver’s licence, a fishing licence, a licence plate (on a car), or a business licence. A licence grants you formal permission to do something, often by an authority such as a government or a statutory body. You can have ‘licences’ (plural; more than one licence) or ‘licence’s’ (possessive; the licence’s expiry date is 30 June), but you cannot have ‘licencing’ or ‘licenced’. They are verbs and so for those usages, you ALWAYS need ‘licensing’ or ‘licensed’.

‘Licence’ is also about the freedom to act: a licence to print money, poetic licence, or the footballer was given licence to roam the forward line.

You will be hard-pressed to find a usage for ‘license’ beyond the plain form (the infinitive) ‘to license’; to license someone means to grant them a licence to do something – “The Medical Board examines and licenses doctors.” Or “I will license you to drive a car.” A retail store is licensed to sell alcohol, i.e. it has a licence from a licensing authority (such as the Victorian Commission for Gambling and Liquor Regulation).

Australian and British English distinguish between usage of this word as a noun (practice) or a verb (practise). As a noun, ‘practice’ is a tangible thing, like a table is a tangible thing; for example you visit your doctor at his/her medical practice and go to football practice. A process, a habit or a routine (or similar) could be standard practice, world’s best practice, usual practice or customary practice.

As a verb, ‘practise’ is about activity that attaches to a subject (e.g. I, He, They). “I practise my ball skills at football practice.” “My mother practises witchcraft in her spare time.” “How do you get to Carnegie Hall? Practise, practise, practise!”

In publications, an ‘issue’ is a discrete output, say, the January issue of a magazine. An ‘edition’ is when that January issue comes out in two or more versions, such as an Australian edition and a US edition. Daily newspapers generally come out in editions; the newspaper published on 10 January 2018 may have come out in first, second and third editions (or more), with content changes between each one. (Editions are used to make corrections or to update breaking news stories without halting production or disrupting distribution.)

Books also can be published in editions (you may see 2nd edition, 3rd edition on the imprint page), which can denote significant content changes over the earlier edition or a new print run with updated cover art.

There is no snooze button on a cat who wants breakfast.

‘Shots fired’, The Age, 25 February 2020. Sports, page 44. This is an instance where ‘several’ would have been a suitable alternative.

‘Trainers, breeders join forces for horse welfare’, The Age, 8 February 2020. News, pages 2-3. An instance where ‘a number of’ sounds like weasel words. ‘Fresh injury blow for the Bombers’, The Age, 22 February 2020. Sports, page 50. Coach-in-waiting Ben Rutten looked to have the reins; his reign as senior coach will start after the 2020 season.

‘Raikkonen’s wife slams Mercedes over crash’, The Age, 11 July 2018, Sports, page 39. Vettel may have received free rein from the crash, not free reign. 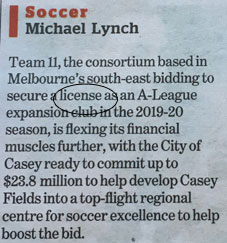 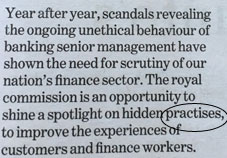 ‘Banks gag staff to bury the toxic truth’, The Age, 8 February 2018, page 21. The royal commission was shining a spotlight on hidden practices, not hidden practises.

‘World’s largest plane moves closer to take-off’, The Age, 13 March 2018, page 9. The plane practised rolling down the runway, not practiced. This was US wire copy; in the US, ‘practice/practiced/ practicing’ is the spelling for all usages.